The SCORE Moldova is an innovative analytical tool designed to improve the understanding of societal dynamics in the country. The SCORE Moldova is based on the Social Cohesion and Reconciliation Index methodology, which was originally developed in Cyprus by the United Nations Development Programme (UNDP) and the Center for Sustainable Peace and Democratic Development (SeeD). Since then, the SCORE has been implemented in several countries in Europe and elsewhere to assist international and national stakeholders in the design of evidence-based solutions that can contribute to strengthening social cohesion efforts. In Moldova, the SCORE process was launched by the United Nations in November 2016 with three main objectives in view:

The SCORE Process in Moldova

The SCORE draws inspiration from multiple scientific disciplines while being flexible enough to incorporate new research findings, global policy guidelines, and the realities of each local and regional context. The SCORE can also flexibly integrate different modalities of data collection as required, including surveys, discourse analysis, and expert assessments, and draws its strength from advanced analytical and statistical toolkits.

The SCORE process is based on participatory research and begins with inclusive consultations with a broad cross-section of national stakeholders, such as civil society, academia, government, business leadership, and local communities (Figure 1). These consultations contribute to an initial in-depth understanding of societal dynamics, informing the conceptual model for social cohesion in a particular country and the calibration of the SCORE questionnaire, which is constant across countries but adjusted to meet the idiosyncratic differences of each context. 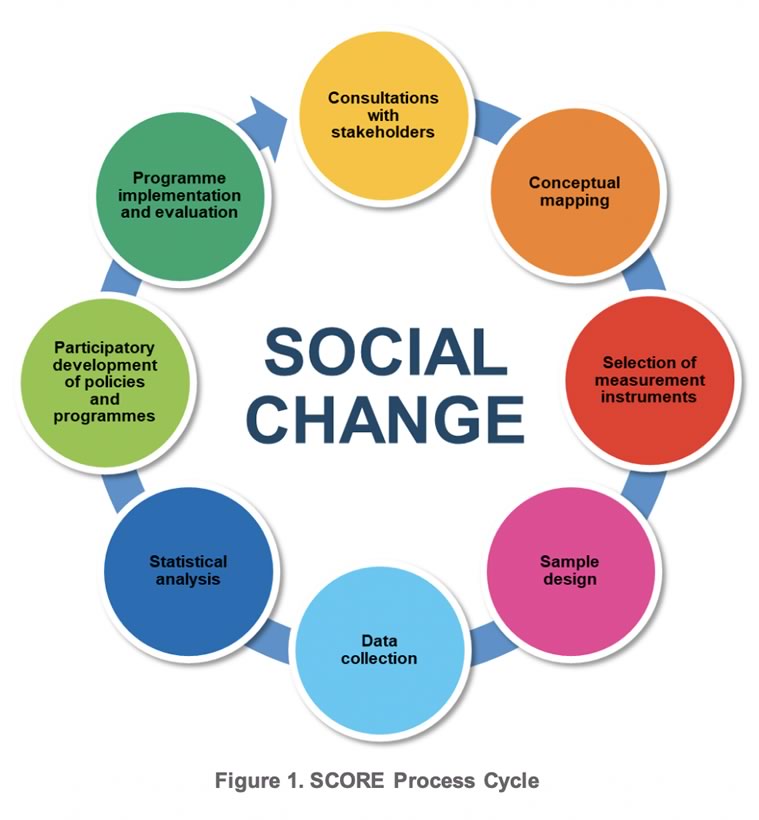 Large SCORE sample frames are designed in a way to ensure that results can be reported with a high level of confidence for different subregions within the country but also for distinct societal groups of interest. In Moldova, for example, a booster sample of people residing in Gagauzia – an autonomous region in the country – was employed to allow for a better understanding of regional differences in responses. Results are processed using advanced data analysis techniques, including factor analysis, ANOVA analysis, regression, and structured equation modelling, from which robust metrics are designed for multiple indicators. These are then translated into network analysis and predictive models that can reveal the intricate relationships between different indicators and groups. This modelling process is used to suggest effective entry points to design evidence-based projects and policies.

The first and pilot phase of the SCORE Moldova was calibrated in late 2016 and early 2017, with stakeholder consultations and numerous regional focus groups conducted across the country. Following the completion of the calibration process and conceptual modelling, the SCORE Moldova questionnaire for adults was designed, translated, and piloted. The quantitative fieldwork for the Adult SCORE Moldova was conducted between October 2017 and January 2018. The survey covered all regions of the country, excluding the Transnistrian region, and was conducted among 1558 adults, including a booster sample of 350 respondents residing in Gagauzia. The fieldwork for the adult component was conducted by CIVIS.

Based on the results of the calibration process, the questionnaire for youth was finalized at the beginning of 2018, and the data collection was conducted between March and April 2018. The survey among youth similarly covered all regions of the country, excluding the Transnistrian region, and was conducted among 1233 youth, including a booster sample of 356 respondents residing in Gagauzia. The fieldwork for the youth component was conducted by CBS-AXA.

A score of 0 for personal security would mean that no one in a given region feels secure at a personal level, while 10 would signify that every person feels absolutely secure. As such, a heatmap of personal security for Moldova illustrates the scores for each of the 5 development regions covered by the SCORE (Chisinau, North, Centre, South, and Gagauzia), allowing for an understanding of the regional variance in terms of personal security across the country.